Crypto Monetary System – Why do we need Crypto Credit-Money? 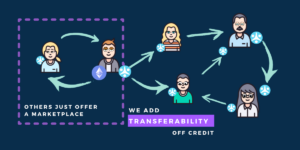 This was a very high-quality conference, especially by the quality of the participants.

Here is a one-pager of the presentation:

Here are the slides of the presentation: https://www.slideshare.net/martinploom/programmable-elastic-credit-money-ver-2

In the following are the key messages of the presentation:

How does a monetary system work?

Every monetary system has two components:

The same principle – credit-money creation via the lending/borrowing – has been used for the last 5’000 years:

What are commercial banks doing?

Commercial banks need to do the following four things:

That’s the key activity of the commercial banks and they are creating ca 40% of their profits via lending/borrowing (credit-money creation/destruction). The additional 30% of profits come from the wealth management (in the case of universal banks) and the remaining 30% are coming as transaction fees (for the payments, safekeeping accounts, for buying/selling securities).

Why do we need Credit-Money?

What would happen if there is no credit-money? Increased lending demand would result in the increased interest rate – the price for the money. This would suffocate economic activity because production needs to be pre-financed.

What types of monetary systems have existed in the past?

Monetary systems can be classified by a matrix:

The Base-money dimension can be either:

The Credit-money dimension can be either:

The monetary systems without the credit-money do not survive – it’s because the raising interest rate will suffocate the economic activity. The economies, which use credit-money will prosper and will develop faster than their surrounding economies. Let’s think here on the Mesopotamia civilization, Phonecia civilization, Islamic Trade Network, Hanseatic Trade Network, England with the tally-stick system, etc.

Perhaps the best example is England with the tally stick system from 1200 BC till 1660 BC – the country without economic resources (compared to their competitors) succeeded to develop into an advanced economy. One of the key factors for this success was the decentral credit-money creation via the tally-stick system.

Where is the crypto credit-money?

How should the Crypto Monetary System work?

Why do we need crypto credit-money?

Crypto credit-money – Will this time be different?