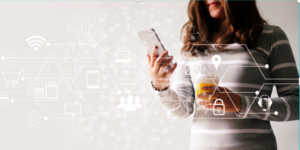 Bitcoin and Digital Banking – can these fit together?

Digital Banking is on everyone’s mind — it’s about automating end-to-end banking processes and offering a digital experience to end clients. The focus on Digital Banking is understandable — we are all witnessing increasing cost pressures, regulatory pressures, and a low-interest-rate environment. Digital Banking is the answer from the traditional banking system to these pressures. However, Digital Banking per se causes little changes to the banking ecosystem: in principle banks continue as they are, they just operate more effectively.

I represent the thesis that Bitcoin and its underlying conceptual technology — Blockchain — may enable revolutionary changes to the banking landscape and the emergence of Digital Banking 2.0.

Bitcoin is a digital currency that enables instant payments to anyone, anywhere in the world. It is based on private-public key cryptography, where the owner of the private key can do transactions with his Bitcoins and where a public key allows anyone to see the number of Bitcoins on a specific address or to send Bitcoins to this address.

The Bitcoin Blockchain is used to track ownership and transactions between Bitcoin holders, but the Blockchain technology is not limited only to Bitcoins — any transaction with digital assets could be represented with this same Blockchain approach.

Blockchain represents an innovation that could be compared in its impact on the invention of the double-entry bookkeeping system or of the legal form of doing business, a corporation. These last two innovations shaped the way we do business today. Will Blockchain be the next big invention?

Most of the financial industry is based on ledgers which record who owns which assets, who receive payments from these assets, and how to transfer ownership of these assets from one participant to another. But these ledgers are all private to banking institutions. This creates the need for a new ecosystem of participants whose core business is transferring ownership between asset owners.

For example: If client A sells 10 shares of IBM to client B, we see the following transactions: Client A’s custodian transfers shares and receives money, and Client B’s custodian receives shares and transfers money. The process can take up to 3 banking days and there is a middleman (clearinghouse) validating that all runs properly. The middleman will charge a fee for this service.

However, Blockchain technology allows the creation of distributed ledgers between all market participants. This results in new business models that exclude middlemen. Client A and Client B may interact directly with each other using a public distributed ledger. It is obvious that this public ledger-based approach increases the efficiency, transparency, and quality of the transaction execution, and at the same time reduces its total cost.

Uses of Blockchain in traditional services

As I said before, most financial assets can be represented digitally: publicly traded instruments will have ISIN codes, and similar codes are being created for OTC instruments too (UTI from ISDA for example). Digitally represented assets can be stored into Blockchains, including information about who owns how much of which asset. Buy and sell transactions would be as simple as moving a specified number of digital assets from one owner to another in a cryptographically secured way. The transferor of the asset has a private key for the authorization of the transaction; the receiver of the asset has to use his private key for payment authorization. The settlement and clearing of trading transactions would be significantly simplified and speeded up by such an approach.

If all assets of a banking client can be represented digitally, his portfolio can be completely represented by the digital asset registry. A client portfolio could contain digitally represented assets and digital money (Bitcoin, Litecoin, Ethereum, etc.). The client could be able to access his portfolio from any place with his private key; he could execute transactions in his digital assets or digital money with his private key, or he can delegate management of his assets to a professional asset manager by assigning him his private key or by using a multi-signature approach in which specific transactions have to be signed by two or more private keys.

New applications for the new technology

Blockchain technology also allows for the implementation of “Smart Contracts” where assets are exchanged on certain conditions against payments. Let’s look again at the example “asset in exchange for payment”. If we have a digital asset that represents an IBM share and if we have a digital means of payment (Bitcoin), then the exchange between Client A and Client B can be executed in one transaction. This new transaction will be added to the Blockchain, it will be cryptographically signed and there will be no way to change it after that. There will be no need for complex 3-banking-days long business processes — everything can be completed within 10 minutes.

This is an example of a basic smart contract. The business logic of a smart contract can be extended in arbitrary ways: there can be multiple participants, there can be escrow services, multiple payment terms, etc. These will be digitally executable contracts between digital assets and digital money. All derivative, future, or bond contracts could be represented as smart contracts so that their processing can be 100% automated.

Bitcoin Blockchain is a public ledger and thus is available to any member of a Bitcoin system. Asset registries and transactions between holders of these assets on Bitcoin Blockchain are visible to anyone too. Public ledgers do not have any gatekeepers defining who can or cannot participate.

The emergence of New Service Providers

Every bank has either built or bought their “ledger” systems for managing huge numbers of standardized digital transactions. Middlemen are facilitating the ownership and flows of funds between banks. Both these bank “ledger” systems and middlemen are becoming obsolete.

Additionally, many big banks experiment with Blockchain technologies. Their main focus is on how to use decentralized ledgers in banking business processes.

Bitcoin may have caused people to overlook the potential of its underlying technology, but based on venture capital investments and experiments in the major banks, we can say for sure that the Blockchain technology is here to stay.

Digital Banking 2.0, based on Bitcoin and Blockchain technology, will result in revolutionary changes in banking. The role of current players in the ecosystem will change and new players will emerge. Many current services will be provided at a much lower cost basis. Middlemen will lose their positions in value chains in the same way it happened in the music industry about 15 years ago. This will translate into changes in banks’ revenue models, which, together with the entrance of new participants to the market, will trigger changes in business models, and result in complete banking ecosystem changes.

However, the advisory process, portfolio management, credit management, and risk management — the know-how intensive disciplines of modern banking — will stay. Banks will simply focus more on their core competencies and less on transaction processing. This will result in an increased focus on know-how intensive areas, which at the end means real value creation for clients.